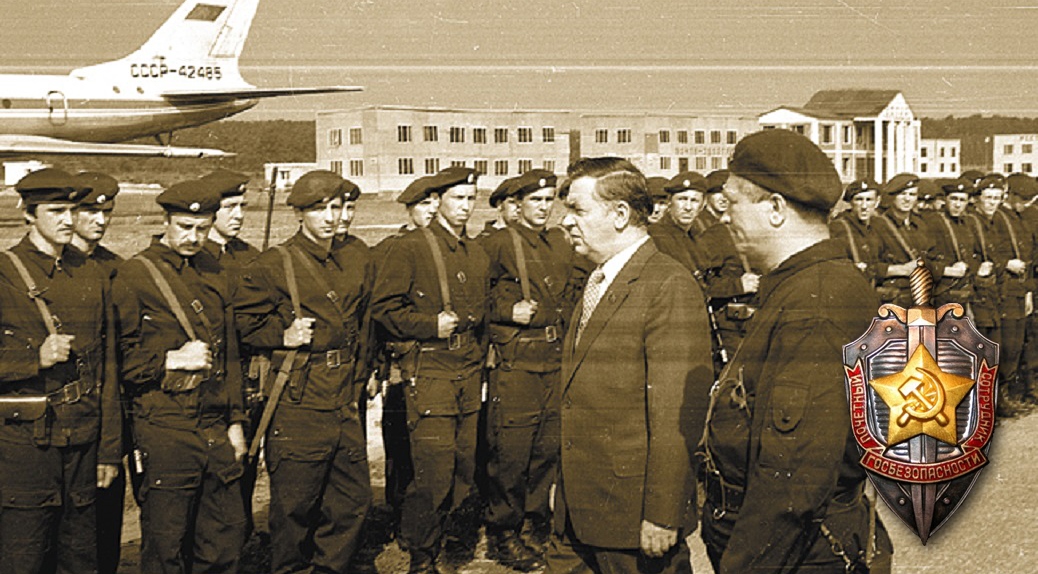 Spetsnaz Group “Alpha” was founded in 1974 on the orders of KGB Chairman Yuri Andropov. As this article by KGB veteran Lt. Col. Igor Atamenenko makes clear, Alpha was not only a secretive anti-terror force, but also the high-class muscle used in the KGB’s counterintelligence operations against foreign intelligence services.

Even the KGB’s overseers from the CPSU Central Committee’s department of administrative organs were not informed of the true purpose of the Group “A,” Lubyanka’s super-secret unit that attained wide publicity under the name of Alpha only after the events of August 1991 in Moscow. For them it was just one of the structures within the KGB, and many operations executed by its officers also remain a closely-guarded secret to this day, continuing to to carry the stamp “Top Secret” and “Of Special Importance.”

Aside from that, Group A of the KGB’s Protection Service of Diplomatic Representations under its 7th Directorate (Surveillance) was meant for fighting terrorism and other especially dangerous extremist manifestations connected with the seizure of hostages, transport, regime facilities, and the buildings of diplomatic missions both on the territory of the Soviet Union and abroad. Moreover, it had six regional units in the cities of Minsk, Kiev, Krasnodar, Alma-Ata, Sverdlovsk, and Khabarovsk. Equipping the group with with weapons, communications, and body armor was carried out in accordance with service norms and a table of regulations affirmed by the special order of KGB Chairman Yuri Andropov.

Candidates to become operators in Group A were selected from KGB officers of the territorial organs who had served no less than three years in an operational unit and were satisfactory condition for…flights into space. That is, they should have been emotionally well-balanced men, optimistically inclined, capable of keeping calm in extreme situations, enduring drops in pressure and temperature, unafraid of water, closed space, darkness and fire of any intensity… They were required not just to do well at sports, buy to master karate or another type of Eastern martial art at the level of a ranked athlete.

Here it’s necessary to note that if one out of 100 candidates made it into the foreign analogues of Group A, such as America’s Delta, the British SAS, or German GSG-9, then one out of a thousand made it into Alpha.

If an officer successfully made it past the initial tests, he then became a trainee. And there awaited him, it would seem, unthinkable stresses, physical and psychological, that grew with each week of training. Sometimes certain trainees at the first level of exhausting exercises experienced the so-called “presence effect.” This is when he already doesn’t have the strength to move a finger, when he curses himself for deciding to become and Alpha operator, and suddenly, he notices that the instructor working nearby is doing the same exercise but looks as cool as a cucumber. “If he can do it, then so can I!” the new trainee tells himself and continues to work.

Alpha operators had to master in full both cold weaponry and firearms of Soviet and foreign manufacture, both serially produced and special types, and be able to drive all forms of combat vehicles. After all, both his life and those of his colleagues in the group, as well as the success of an operation, depended on it. Aside from that, in combat situations there’s no time to thumb through a manual, and therefore everything must not only be kept in one’s head, but actions must be brought to automatism, and knowledge to the level of the subconscious.

Yet most of all, this time was devoted to techniques of hand-to-hand combat, with the aid of which one can suppress an opponent with shock, trauma, and even lethal action in one moment. Banal brawling wasn’t meant under the unassuming term of “hand-to-hand.” For the subject collected the best systems of recognized masters of Sambo, Jiu-Jutsu, Karate, Tae Kwon Do, Greco-Roman and freestyle wrestling, and boxing. In other words, this was a synthetic sport, and to master it was not easy!

This was not a times table that could be learned once and for all. Alpha operators knew: don’t train for a day, and you’ll see you’re not up to form. A week, and your sparring partners will notice. A month, and it’s better to refuse to fight…

At the count of three, an Alpha operator should have been able to tear off an opponent’s ears, genitals, or arm. The principle is such: success lasts no longer than a second. Coming into striking distance, you’re obligated to work over the “object” in one breath, so that he either dies or is curled up on the ground, having failed to understand what just happened to him.

In addition, trainees mastered airborne training and the art of rappelling.

Special attention was always devoted to hand-to-hand combat in Alpha. Along with that, training was conducted only with the use of individual methods and took into account the operator’s psychological preparation. For each officer there was developed a personal complex of techniques that would have corresponded to his psychological, physical, and moral particularities. A full-fledged Alpha officer would fight hand-to-hand without any inhibitive emotions and feelings. The will was cultivated through overcoming fear and pain in matches with a stronger opponent, the role of whom the instructor took during training. When he dealt a blow during training sessions, the trainee was required to do only one thing: stay on his feet.

Instructors also considered cultivation through pain one of the fundamental principles of general physical and psychological preparation of trainees. They were convinced that among the operators of Alpha, there was no place not only for men who would not carry out orders, but for those who were even inclined to think about their expediency.

A group of Alpha operators, going, let’s say, to snatch a foreign intelligence officer at the moment of his loading a dead drop, was obligated to act precisely and clearly as one well-oiled mechanism. Success depended on each man, and sometimes the lives of everyone, and the life and success of each depended on everyone. Alpha operators acted according to the principle of the Musketeers: “All for one and one for all.” One of the former leadership of the KGB, present at a training session, called the operators “quick snatchers.” The name stuck…

The transformation of an Alpha team into a united well-oiled mechanism hardly led to the “robotization” of the officers. No one was trying to make them unthinking “terminators” from the movies, and foremost they sought to develop mental capabilities.

Psychological tests included undergoing an entire complex of intellectual and personality tests that had been developed over the course of decades and refined in the Soviet Union and beyond its borders, tests based on the methods of Soviet and foreign scientists. These were thousands of questions, assignments, brain-busters, and, of course, verification on the polygraph (lie detector). The developed perspective plan of special measures for creating conditions of material-technical support to carry out special actions was constantly augmented and polished.

However, the main attention was dedicated to the cultivation of an operations-capable collective, inasmuch as any equipment and weapon can only be “played” in the hands of a high-class specialist. And the main thing was to unite men who were devoted to the cause and ready to carry out any assignment, men whom one could vouch for the full 100%.

Alongside physical preparation, in the course of training according to Alpha’s system, much attention was devoted to the study of methods of intelligence and counterintelligence, because one of the group’s main directives was securing work with agents plus a command of the skills to acquire operationally significant information, right up to polling the populace and clarifying popular opinion. This, as well, required knowledge of the region of possible combat action, its history, national psychology and customs, in a word, everything that could be of use for the collection and analysis of information and recruitment of agent networks among the local inhabitants…

Multi-faceted training assumed not just a few places for carrying out exercises. One of them, where the Alpha operators, having said goodbye to their families as football players would do before decisive matches, went for around a month and a half and was located in Yaroslavl Oblast at the Border Forces Training Center. Hand-to-hand combat techniques were sharpened, as a rule, in gymnasiums belonging to the 9th Directorate of the KGB (physical protection of members of the Politburo and Soviet government).

Range training, polishing skills for handling air, sea, and land transport, and also armored vehicles – all were conducted in various regions of the Soviet Union. This was done not only over reasons of operational security. Alpha had to learn to act habitually in any climatic zones, whether in the desert or the mountains, in scorching heat and extreme cold – “antiterrorist fate” could drop them anywhere!

One of the most illustrative examples of applying physical coercion in practice – or as officers themselves called it, “shock therapy” as the use of applied psychology – was the practice of “snatching” hostile intelligence officers and their agents in the most unexpected places.

It is necessary to explain that a “snatch and grab” is the covert detainment of a target of operational focus, and it is undertaken secretly so that neither friends nor colleagues at work would know about it. If the target is suspected of ties to a foreign intelligence service, the surprise disappearance should also remain a secret for his masters. If only for a time.

Both Soviet citizens and subjects of other states were snatched. For that purpose the operators try and select an unfrequented place, but it happens that a person can be pulled out of a crowd.

Mastering the techniques of hand-to-hand combat brilliantly and knowing the anatomy and position of the most vulnerable pressure points of the human body to the letter, Alpha operators managed their assignments in seconds. In an extreme case passers-by might notice that two men are helping a friend, either sick or drunk, into a car… After which the “snatchee” would end up either at Lubyanka or Lefortovo.

At the end of 1985, Adolph Tolkachev, a traitor who sold the CIA the wonders of Soviet aero-navigational equipment, was arrested. Already at Lefortovo Prison, he requested that his fellow inmates figure out just how the men who seized him were able to not only snap the “bracelets” onto his wrists, but also strip him naked in one moment. (Stripping spies at the moment of detainment was done exclusively with the objective of uncovering a poison capsule on their body or in their personal effects.)

The principle of Alpha operators was to “fly like a butterfly and sting like a bee.” But first the mind worked, with the hands and legs going into battle afterwards. The mind, however, also isn’t dozing during battle.

To snatch a target was still not everything, but only the beginning. It’s a small matter to carry out a detainment without noise and a cloud of dust – the main thing is sit the shape-shifter down face-to-face with the interrogator before he can come to his senses from the shock. Only in this case will he begin to give a truthful confession. That’s professionalism of a higher standard. Shock therapy is an art.

The techniques of shock therapy, though, are kept a secret to this day. And that’s understandable: since espionage hasn’t been abolished, the snatches also continue.

Only from 1985 to 1990, 13 of the most inveterate moles and their controllers – intelligence officers working under the cover of foreign embassies in Moscow – were covertly detained under the leadership and direct participation of Alpha deputy commander Vladimir Zaitsev and his section.