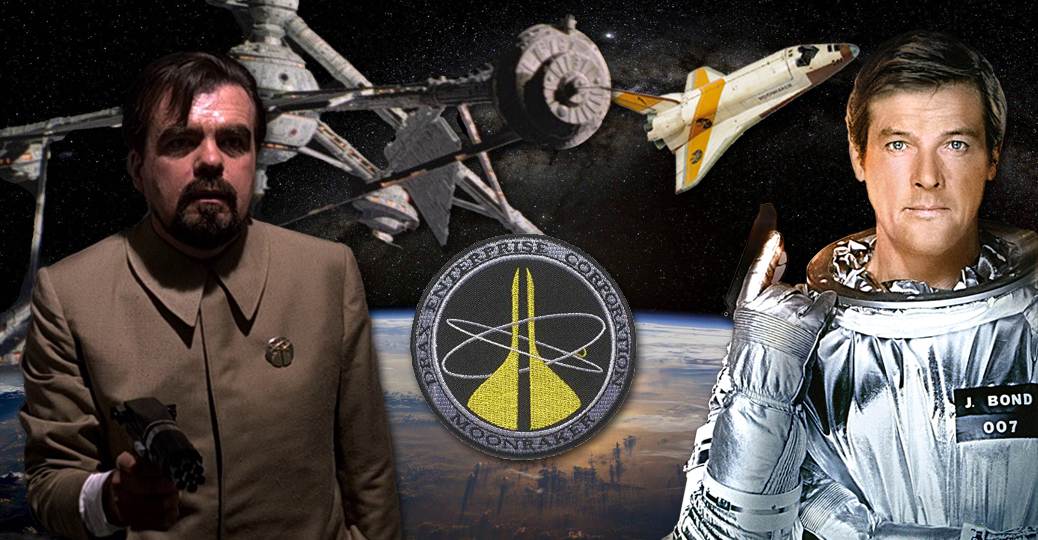 A notable example of the breakaway civilization in film is the 1979 film adaptation of Ian Fleming’s Moonraker. Moonraker the film differs significantly from the Fleming’s novel, but the differences and parallels are important to highlight: the novel focuses on a kind of Operation Paperclip scenario, wherein Sir Hugo Drax is secretly building a V-2 rocket in tandem with the Nazis to destroy England and rebuild the Reich. For many, the film adaptation a few decades later represented an exceedingly outlandish interpolation on a pulp spy novel that failed to achieve much more than mimicking the box office success of science-fiction blockbusters it attempted to copy, cinematic innovations like 2001 and Star Wars.

On the contrary, more is at work here than just inserting 007 into a Star Wars laser-battle setting. The most obvious factor to recall is that 1979 is roughly the birth of the Strategic Defense Initiative (born at Bohemian Grove), where plans would be posited for a DARPA-style space-based weapons system in the vein of Skynet. Thus, concurrent with this deep- state project initiated under the auspices of the Cold War showdown with the Soviets, Tesla-esque satellite decapitation and directed-energy weapon scenarios would become the Skynet/Smartgrid Internet of Things as we see it today.

In tandem with the decades early planning, predictive programming in Hollywood blockbusters would prepare generations for the implementation of that grid – such as ARPANET (the Internet) – in the near future. Thus, Moonraker the film represents the second phase of the Operation Paperclip/NASA program that birthed the rocket and “UFO/foo fighter” aerospace technology. Taking a step back, the 1954 Fleming book Moonraker was the first stage of the same “space program” that Moonraker the film symbolically updated, and that is the deeper reason for the science-fiction trajectory of the narrative. Recall as well that by the late 1970’s, 007 was already history’s largest film franchise, so we can expect it to have been crucial in preparatory induction for the planned technocratic age.  (The novel’s plot is rather similar to Guy Ritchie’s recent Man From U.N.C.L.E.).

Mention should also be made of Diamonds Are Forever, recently analyzed with regard to the private aerospace program of Howard Hughes. Diamonds Are Forever contains the famous scene of a faked moon landing utilizing actors and a sound stage in a desert facility owned by Hughes stand-in Willard Whyte, while real aerospace technology was being developed behind the veil of the NASA/Hollywood façade. Concerning Diamonds Are Forever, just like Moonraker, we have the revelation that the real space program is a private one, not the public “government” front institution known as NASA. Howard Hughes was not only an aerospace engineer, but also a Hollywood film director, which suggests Fleming and his film incarnations reveal much more than is generally supposed. I wrote concerning Diamonds (note as well the theme of directed energy weapons, a central aspect of the Strategic Defense Initiative):

When we consider Hughes’ close connection to the CIA through operations like Project AZORIAN, which sounds just like a SPECTRE-style operation from a 007 film, we can certainly presume much more was being conveyed here. Even questions relating to the moon mission arise, given the seemingly out-of-place shot of Bond stumbling across a sound stage in Hughes’ facility, where actors in astronaut suits are staging a phony lunar landing. Is Fleming implying that the moon mission itself was a psychological operation? Speculation is welcomed here, but the real message of Diamonds centers around exotic weaponry along directed energy lines. The same theme re-emerges in the 1974 film adaptation of Fleming’s The Man with the Golden Gun, where alchemy and techne combine to reveal the Pentagon’s darkest future tech. Given that Jackie married Aristotle Onassis just five years after JFK was gone, could this signify a mafia-mandated marriage tradition? Perhaps Fleming knew the answer about this and the real SPECTRE.

And so with Moonraker, the most ridiculous and silly of 007 films, all the obligatory puns and innuendos so characteristic of the Roger Moore era serve to mask a rather profound secret of the overall deep-state agenda. In the plot we discover that Hugo Drax has stolen a space shuttle through his German underlings to reverse-engineer the technology for nefarious machinations. Meanwhile, 007 is on his trail battling the laughable Jaws (Richard Kiel) in mid-air as Jaws loses his parachute, plummeting into no less than a circus tent. At first, one can brush this off as pure absurdity common to the Moore era, but comparisons to Diamonds Are Forever began to emerge, as the circus theme of Las Vegas functioned prominently there, as well. Both films run roughly parallel, describing the same themes and events – a private space program that operates under various fronts and shells, intent on cornering the market under a shadow-government technocracy (SPECTRE) intent on mass depopulation and the creation of a “new world” modelled after Noah’s Ark.

In both films our respective villains also work together with the mafia and criminal underground to achieve their designs, with the various crime groups subservient to the overriding, internationalist SPECTRE. Even though Drax is not a member of SPECTRE like Blofeld, the principles he enacts are all the same. Blofeld’s jewel heist and his casino/aerospace takeover operation perfectly mirror Drax’s technological theft and private aerospace company, with various shells and fronts funding the true programs of both “fictional” oligarchs. In fact, the Moonraker facility Drax runs resembles NASA and other deep state-facilities, yet it is not the real Drax aerospace facility.

An interesting parallel should also be mentioned here in regard to Bond slipping into Drax’s facility, where our hero discovers a keypad that plays a certain series of auditory tones to access the bioweapon lab. The musical tones just happen to be the same as the famous musical tones the “aliens” play in Spielberg’s Close Encounters of the Third Kind. This could either be happenstance or due to Spielberg’s numerous connections to the Bond films. For example, think of the bird scene in Last Crusade or the Temple of Doom shots in India, lifted from none other than Never Say Never Again. It could also be that the musical tones in Close Encounters, which opened two years prior to Moonraker in 1977, are a subtle clue to government news fakery and a secret space program.

Drax has constructed a secret facility underground beneath a ruined temple in Argentina, where a bevy of multi-racial beauties entrap Bond in an Edenic battle with a massive boa constrictor. The scene is purposefully reminiscent of Eden, and as Drax predictably brags about his plot to 007, we learn he is a radical eugenicist with distinctly dysgenic plans: modifying the DNA of the black orchid to produce a lethal nerve gas that will depopulate the globe. Argentina and Chile are said to have been havens of post-war Nazis through sites like Colonia Dignidad, yet Drax is no Nazi. He does plan to create a “master race,” yet his approach is more Fabian, as he has sampled the most fit and well-bred from all the races.

In a telling scene in space, 007 explains to Dr. Goodhead the real plan is Noah’s Ark – a breakaway civilization. Drax intends to become “a new god, whose progeny will all call him the new man, the new creator” through technology as he will re-seed the earth with his offspring, descending from the man-made “heaven” of the Moonraker, Drax’s covert space facility. All these images purposefully reflect Genesis – from creation, Adam and Eve, to Noah, with Drax as the representative Promethean/Luciferian figure who intends to use the secrets of nature and ancient mysteries (the Temple and the Genesis account) to become a god siring a genetically modified, superior race of immortal offspring. The series is thus presenting a variant of transhumanism. In this sense, the meaning of the vanished ancient civilization of Argentina is explained as resulting from the sterility of the black orchid.  Drax redesigns the black orchid in its chemical makeup (genetic modification) to become highly lethal, by means of which he will aerosol spray major city centers (chemtrails).

This is the secret behind the Drax corporation’s hexagonal logo for their glass company, itself a front for bioweapons research. As many have pointed out, the cubical/hexagonal figure specifically pertains to the molecular level of our physical dimension. It is the mastery of this physico-material level of existence that Drax’s scientism is based on, and rather than a barren rationalistic scientism, Drax is revealed to be a believer in mythology and transhumanism. Drax is thus emblematic of the real technocratic oligarchs of our day who, behind the guise of New Atheism, are actually committed to the breakaway-civilization idea of wiping the slate clean through worldwide cataclysm and a new Noah’s Ark. Think here of preeminent globalist “humanitarian” Bill Gates’ involvements – he has vast interests in aerosolized geoengineering, DNA manipulation, vaccines and alteration, Monsanto and transhumanism, as well as doomsday seed vaults. Sounds like Hugo Drax.

When we consider the fact that many of the big tech heads like Bill Gates, Peter Thiel or Elon Musk all make public statements warning of the dangers of technology and the “A.I. takeover,” we can’t forget they are also busy in their promotion of humanity’s technological overwrite. Indeed, Musk runs SpaceX, a private space company, and is also a proponent of transhumanism. Much of what we are seeing is a façade, a front plastered before us by Hollywood and mass media, while the real space program has operated privately, in secret, with the subtly revealed intention of creating a breakaway civilization that echoes the predictive programming we see in films like Moonraker or novels such as Atlas Shrugged. It is precisely because these plans seem so far-fetched, seemingly confined to the realm of popular fiction, that the mass public could never conceive of them as real. Yet dysgenics operations are very real, very public disclosures.  Perhaps Hollywood has also disclosed the other side of that story – the plan for a breakaway civilization.